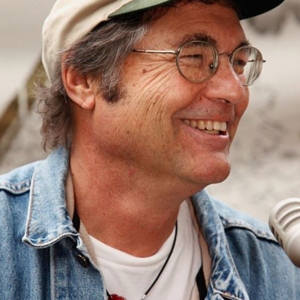 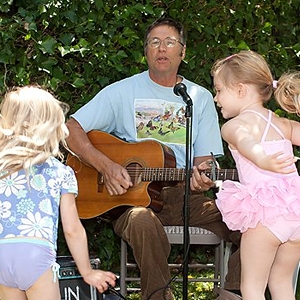 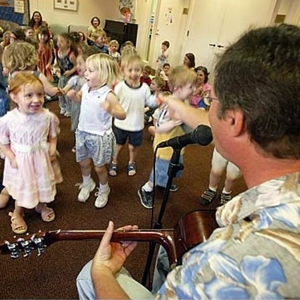 For decades, listeners have been impressed by Tim Cain's prodigious musical abilities. As a sax player, he co-founded the popular 60's rock group, "The Sons of Champlin", which toured nationally and produced 6 albums. Later, while raising a family, he continued to perform and produce music, but of a more acoustic nature, always with attention to fine quality and with a great deal of heart. Now Tim is making major tracks with music concerts and recordings especially for children ages 3-8.

In his work, Tim not only imparts his love of music, but offers himself as an example for kids. He was paralyzed from the waist down with polio at age 7 and believes children benefit from seeing him, with his handicap, as "just a regular person whose legs don't work". He charms his audiences with the same indomitable spirit that helped him overcome adversity, and his happy-to-be-alive attitude is infectious and inspiring.

Guitar in hand, Tim Cain at his sing-along concerts provides an oppurtunity for children, as well as parents, to participate in a positive group experience with singing and movement. His warmth, good humor, and spontaneity make his shows engaging and accessible to all. Lots of laughter accompanies a rollicking good time. Tim knows that happy childhoods last a lifetime, and his efforts contribute to that goal by giving young audiences a dose of joy that they'll cherish and remember.