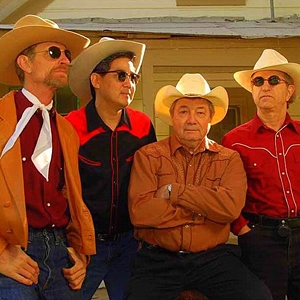 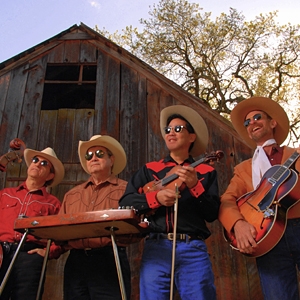 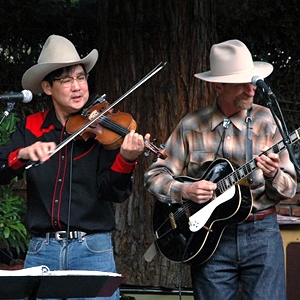 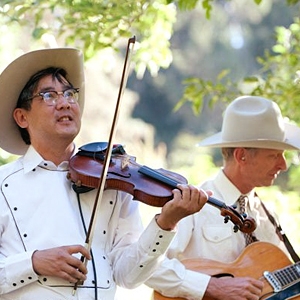 The Saddle Cats are a Western Swing four-piece that is enlivening Cowboy and Western Music with a singular energy and drive. Their avowed goal: to celebrate the swing tradition of Bob Wills, Milton Brown and Spade Cooley with abandon, finesse and exuberant spirits.

Hailing from the San Francisco Bay Area, The Saddle Cats have at their heart the suave, elegant artistry of Bobby Black, whose steel guitar poetics have been an inspiration to generations of musicians. A revered figure in the musical world whose roots go straight back to the honky tonk era of Hank Williams and Lefty Frizell, Bobby was a key figure in the rediscovery of Western Swing in the 1960s and '70s. His membership in such bands as Commander Cody and his Lost Planet Airmen and Asleep at the Wheel was decisive in introducing the sound of Western Swing to a new generation of listeners.

Bobby is joined by fiddler and vocalist Richard Chon (Dan Hicks and the Hot Licks, the Sons of the San Joaquin and a veteran of the Bakersfield honky tonk scene). Together, Bobby and Richard form the nucleus of a Western Swing pocket orchestra whose likes are rarely seen or heard. The Saddle Cats uncannily recreate the textures and drive of the Western Swing bands of the golden era.

The driving rhythm of guitarist Gordon Clegg and the eloquent, rock-solid foundations laid by bassist Bing Nathan support and energize this sleek, silver-toned cowboy outfit, whose repertoire runs from rustic Texas breakdowns to the sophisticated swing concoctions of Benny Goodman and Count Basie, from the high-driving California swing of Bob Wills' Tiffany Transcriptions and Tex Williams to the Cats’ own stylish originals.