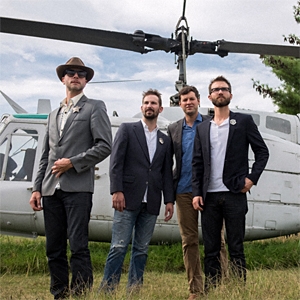 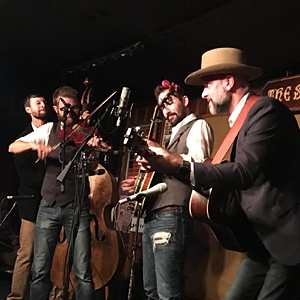 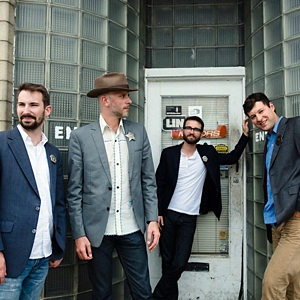 Sheriff Scott and the Deputies

From the streets of Nashville, the Deputies have found a strong and passionate instrumental voice for the sweet, urban songwriting of Sheriff Scott Simontacchi. The band got their start performing at the infamous, “Brown’s Diner,” a double-wide trailer known as much for its hamburgers as for its clientele of songwriters and performers. Scott’s vest—adorned with a 5 pointed badge—quickly commanded the attention of the small room. After a few notes the crowd was hooked and Sheriff Scott and the Deputies began down their great journey of “Once Upon A Time…”

Rooted in bluegrass music, this quartet stretches the traditional boundaries. Combine these backgrounds: theatre arts, carpentry, photography, engineering, music business, poetry, magic tricks, opera, award winning fiddle, and the law. Safe in a cave, comfortable in a barn, and at ease in a museum, Sheriff Scott and the Deputies seek out unconventional venues: a sold out show at the Bluegrass Underground, a packed house at The Loveless Barn, and an intimate show at The International Bluegrass Museum in Owensboro, Kentucky. A live taping of their performance on Music City Roots will be aired on PBS in 2018. This year debuts their studio efforts with a self-titled album, recorded, engineered and produced entirely by the band. The Deputies take great pride in their live sound and stage shows, giving them an expressive and dynamic presence that appeals to a wide variety of audiences.

In many ways, Sheriff Scott and the Deputies are still emerging from the cocoon of Nashville. They have taken their time and care to hone their skills, their sound, their look and their songs. Instead of presenting cookie-cutter country music, the Deputies present a fresh, dark and modern interpretation on traditional music that is entirely their own. There is no other band like Sheriff Scott and the Deputies, and when they take the stage their presence commands law and order. Get Deputized!