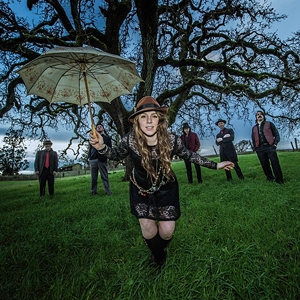 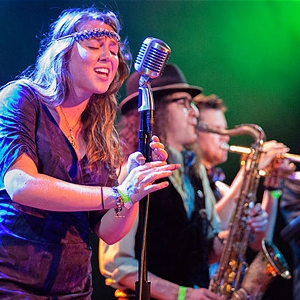 Few bands have the ability to evoke an old-school throwback vibe and yet sound entirely fresh and new at the same time. Royal Jelly Jive is one of those bands. Combining elements of Soul, Rock, Swing and Hip-Hop, Royal Jelly Jive shakes up every dance-party and grooves harder than your typical rock n' roll band dares to go. It is all fronted by enigmatic singer Lauren Bjelde, whose sultry voice and songwriting lands somewhere in-between Amy Winehouse and Tom Waits. The infectious sounds of swingin' horns, gritty keys and a bumpin' rhythm section carry a crowd into bliss... creating an unforgettable live experience that will leave you wanting more.

Since forming in San Francisco's own Boom Boom Room in the summer of 2013, Royal Jelly Jive has quickly ascended to become one of the Bay Area's most anticipated acts. After releasing their debut album to a packed house at Slims in late 2014, they hit the road and-and have been touring non-stop ever since. Playing hi-energy shows and festivals in cities and towns all across the West Coast, they have captivated the ears and hearts of almost all who hear them, intoxicating the masses with their unique and infectious music. They have been lucky enough to share stages with notable acts such as Michael Franti, Rebrirth Brass Band, The California Honeydrops as well as performing at this past year’s Outsidelands Music Festival, Soul’d Out Music Festival, and are on the bill for this years’ Bottlerock Music Festival, Joshua Tree Music Festival and Portland’s Waterfront Blues Festival.