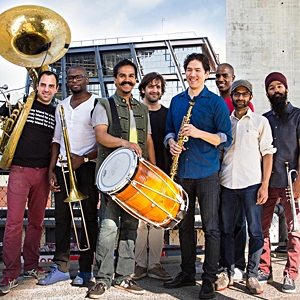 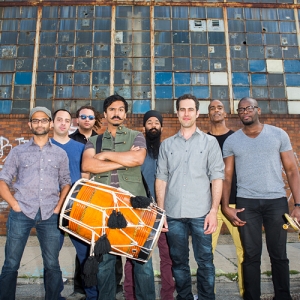 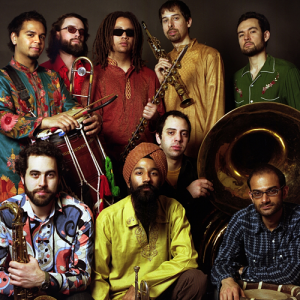 The place: a club in the middle of Brooklyn renowned for its sophisticated clientele, its receptivity to innovation, and its ideas from abroad. On a small stage in a tight, dimly lit back room, eight musicians are whipping a New York City crowd into a frenzy with an unprecedented, high energy, gut-busting fusion of jazz, hip-hop beats, rock muscle, funky go-go, and scalding hot bhangra. A horn section blares, percussionists pound, everybody shouts, and the group’s charismatic leader, Sunny Jain, holds the explosive songs together with rhythms from his dhol – the Indian double-headed drum played slung over the shoulder that provides bhangra with its frenetic heartbeat. And just as it was the month before, the line of patrons who came to this club in Park Slope stretched out the door and down the block because they couldn’t get enough of Red Baraat – a riveting octet that NPR has dubbed “The best party band in years.”

Versatility is one the band’s hallmarks. Red Baraat can mesmerize an audience with a funk groove, turn a switch, and drive the same crowd to the brink of delirium. Since its formation in 2008 and those storied nights at Barbes in Park Slope, the magic of Red Baraat has spread far beyond New York City. The group’s second studio album in 2013, Shruggy Ji, debuted at #1 on the Billboard World Music charts and propelled the band on a nonstop three-year world tour that included appearances at Bonnaroo, Austin City Limits, Hardly Strictly Bluegrass, New Orleans Jazz & Heritage Festival and Peter Gabriel’s WOMAD Festivals in Australia, New Zealand and the UK. Along the way they sold out rooms as diverse as the Luxembourg Philharmonic and New York City’s iconic Bowery Ballroom, and performed at the request of The White House, TED and Olympic Games. Yet no matter how much success and notoriety Red Baraat has achieved, Sunny Jain and his comrades have never stopped experimenting or adding new elements to their peculiar alchemy.