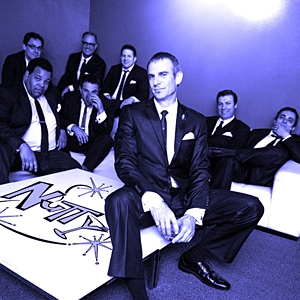 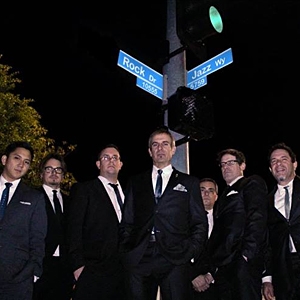 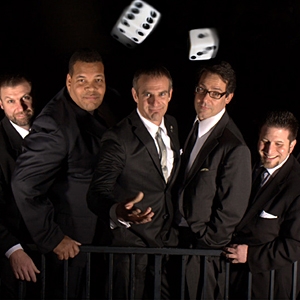 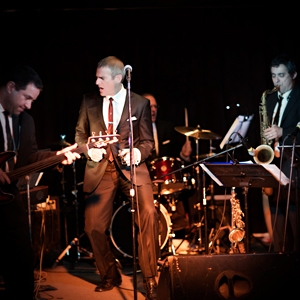 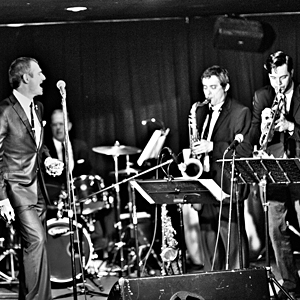 Welcome to the world of Nutty, where eight swank jazzniks stroll among the classic rock archives, fueled with a martini mix of straight-ahead jazz, big band swing, crime jazz/spy jazz, atomic lounge, Latin, bebop and some film/TV soundtrack jazz just for added kick... that is, kicks.

So dig: the band was formed by Sonny Moon (Joel Hile) and Guy Wonder (Mike Werner), who met in an earlier jump blues project called Chase Lounge and the Lazy Boys. Sonny was steering the band toward a lounge jazz sound, and Guy's addition to the band cemented the jazz transformation. The band then became nutty, and so became Nutty, and the Moon/Wonder collaboration focused on jazz renditions of familiar classic rock songs. Next thing you know, the music evolved into a catalog of derivative interpretations of pop/rock hits, using jazz music as the canvas. Who'da thought?

Like, it's this crazy dream where some rockers named Hendrix, Ozzy, Neil Young and The Who are sittin' in with jazz cats like Miles, Dizzy, Mancini and the Duke. Like Van Halen's doin' the cha-cha and Brubeck's got the Moody Blues, Thelonious is the fifth Monkee and Sinatra's playin' a Cheap Trick on Basie.

It's mashups, composite compositions, rock/jazz tapestries performed against a backdrop of what feels like a Rat Pack show in the Copa Room at the Sands in 1960s Las Vegas.

In the jazz world, pro players work around recording and touring schedules, and Nutty has had its lion's share of talent over the years. The current lineup is, hands down, the tightest to date. These are the cats that make with the "jetsetter jazz."