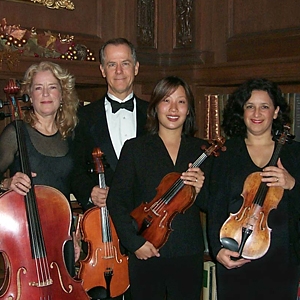 Led by Teressa "Terry" Adams (cellist and music coordinator) ensemble members include some of the finest, most experienced professional musicians in the Bay Area. Individually, they have performed with the San Francisco, Oakland and San Jose symphonies, and participated in hundreds of recording sessions and musical theater productions such as "Les Miserables," "Showboat," "Evita," "Miss Saigon" and "Phantom of the Opera."

Ensemble players have performed at many of the Bay Area's finest venues — country clubs and mansions, hotels, restaurants, museums and exhibit halls, wineries and other up-scale locales.

The Nob Hill String Ensembles include:

Additional instruments — such as trumpet, piano or bass — may be added or substituted upon request. One or more vocalists may also be added to extend the range of your event's music program.