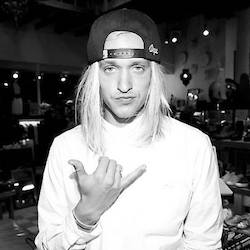 DJ Van Ville, born and raised in the city Streets of LA, also a citizen to Berlin, speaks English and German. He began making a name for himself in the acting world, getting roles and scenes alongside Billy Bob Thornton, Owen Wilson, Martin Lawrence, Adrien Brody, Sean William Scott, and more.

With the popularity of him growing as a DJ in the Hollywood scene since 2004, he has really cultivated his personal style to include mixes of everything from Indie Dance, Nu Disco, Electro, Funk, Soul, Rock from the 50's, 60's, 70's, 80's, 90's and psychedelic tunes, to Oldies, Reggae, Disco, Funk and Soul.

Being exposed at a young age to some of the most exclusive clubs/events in LA was a true inspiration to Max. He learned how to rock both club-oriented crowds and music aficionado crowds, mixing everything from oldies, soul, funk, reggae and electro while still be able to master the needs of the masses and getting people addicted to his kind of music taste. Angeleno Magazine just awarded Max with an article in their "Men's Issue" as the DJ OF LA.