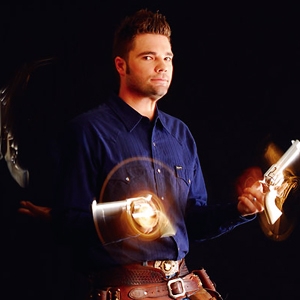 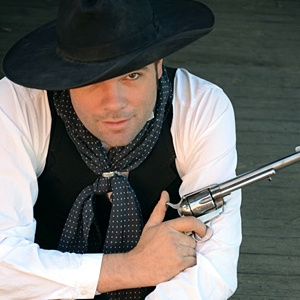 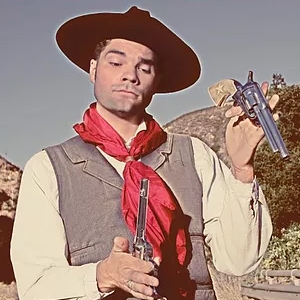 Joey Dillon is a multiple World Champion at the art of trick gun handling and is Hollywood's go to guy for training actors to look good with a gun on many recent films. He has also made appearances in front of the camera as an expert discussing the history of the firearms he uses and the men who used them. He has been seen on the History, Discovery, Biography, and Military Channels as well as Spike TV and a few others. When not working in Hollywood Joey travels the globe with his stage act consisting of comedy, history, music, and tons of trick gun handling. A unique variety of God-given talents rolled into one performance.

Joey Dillon has an array of TV and film credits to help promote your event and peak the interests of any audience. On top of that, once the audience fills the seats, the live one-man gunslinger stage show continues to capture their interest and imagination. It is comedically and verbally driven so while spinning, slinging, and juggling the six-guns around Joey Dillon continues to talk and joke and even grabs a couple audience members to come up and help out. It is a combination of elements taken from almost 20 years of performing to create a show about cowboy gunhandling that is entertaining for everyone of all ages even if you’re not a gun lover or history nut.

Although shooting blanks spices up the show many performances are done without a single shot fired, depending on the venue. It certainly does not make or break the feel.

Joey's show is insured and where needed can be performed with fake but authentic looking guns.

Usually Joey Dillon performs a well-rounded half-hour stage show. In some cases multiple times over the course of the event or festival. It seems to be about the best fit, however he can custom fit the show length for any event and when combining his original western music ballads can perform up to 90 minutes!