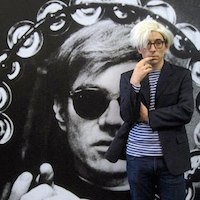 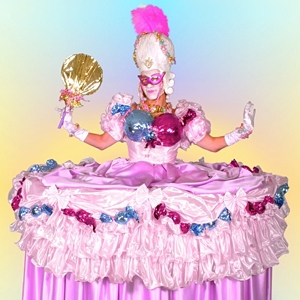 Jef Valentine is an actor and shape-shifting performance artist who plies his trade mainly in the Bay Area and environs. The word chameleon has often been applied to him as he sheds one persona for the next, dashing from interactive hijinks at high-tone soirees to exercises in absurdity in the seedy underbelly of San Francisco’s nightclub scene. He’s appeared in saucy and satirical theatre productions with such companies as Thrillpeddlers, Ray of Light, Rhinoceros, San Jose Stage, Broadway by the Bay, Cutting Ball and Shotgun Players. His recent solo venture at A.C.T.’s Costume Shop Theatre, “PAN-o-RAMA” explored his fascination with author J.M. Barrie and his enduring creation, Peter Pan. Other places he’s been sighted with some regularity include The Edwardian Ball, Friday Nights at the DeYoung, Trannyshack, Peaches Christ’s Midnight Mass Players and the long-running burlesque review “Dirty Little Secret” at the Empire Plush Room. His celebrity impersonations and improv comic characters have entertained at special events of every description, including in the homes of Rita Moreno, Robin Williams, Danielle Steele and Barry Bonds, to name-drop a few. He’s ringmastered a circus, endorsed a Finnish chewing gum, and tap danced 9.6 miles through the streets of San Francisco and into the Guinness Book of World Records.