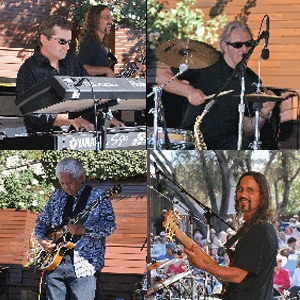 For those of you that are not familiar with Forté, they are a San Francisco based band that tours nationally and performs at local events on a regular basis. Their irresistible blend of Funk/R&B, Mo-Town and Contemporary Jazz influence is what keeps them in popular demand. They have shared the stage and opened for many national artists that include Chris Botti, Chuck Mangione, Peabo Bryson, George Duke, Boney James, Chaka Kan, Pancho Sanchez and many others... Forté is available for private parties, festivals, corporate events and concerts.

Vince Lars: (sax) Vince has performed and toured with a wide variety of musicians such as Tony-Toni, Janet Jackson, Eric Benet's, Larry Graham and The Family Stone, En Vouge, Boz Scaggs, Baby Face, Destiny Child and many others.