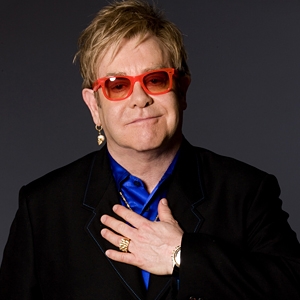 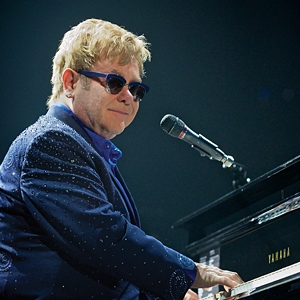 Sir Elton John, an English singer-songwriter, composer and pianist. Initially marketed as a singer/songwriter, John soon revealed he could craft pop and pound out rockers with equal tenacity. He could dip into soul, disco and country, as well as classic pop balladry and even progressive rock. His versatility, combined with his effortless melodic skills, dynamic charisma and flamboyant stage shows made him the most popular recording artist of the '70s and highly popular to this day. Unlike many pop stars, John was able to sustain his popularity, charting a Top 40 single every single year from 1970 to 1996.

In his four-decade career, John has sold more than 250 million records,making him one of the most successful artists of all time. His single "Candle in the Wind 1997" has sold over 37 million copies, becoming the best selling single of all time. He has more than 50 Top 40 hits, including seven consecutive No. 1 U.S. albums, 56 Top 40 Singles 16 Top 10, four No. 2 hits, and nine No. 1 hits. He has won five Grammy awards, an Academy Award, a Golden Globe award and a Tony Award. In 2004, Rolling Stone ranked him Number 49 on its list of the 100 greatest artists of all time.