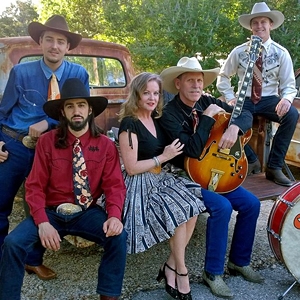 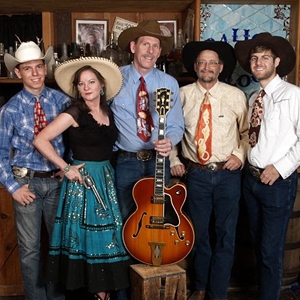 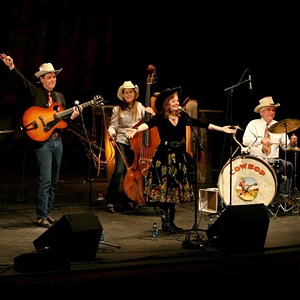 Add mix swingin’ grooves, thrilling riffs, sweet and hot vocals, western sensibilities and tons of fun, and you have only begun to describe Cow Bop. Formed in 2003 by internationally-acclaimed guitarist Bruce Forman, the cowboy jazz and western bebop band has toured extensively throughout the world, exciting audiences with their unique brand of music.

Recently inducted into the Texas Western Swing Hall of Fame (2014), the band’s collective experience crosses the spectrum of American music, from the hottest jazz and the coolest swing to the fiercest down-home honky-tonk. Comfortable in diverse settings, from Carnegie Hall to roadside taverns, the band always hits the stage with an electrifying and entertaining assortment of music and frolic. Along with Bruce Forman on guitar, the band features Pinto Pammy on vocals, whose talent and experiences range from big band swing, old-time country and musical theater, and mutli-instrumentalist David Wise, whose sax and trumpet playing takes you from the streets of New Orleans to the wildest sounds found on range or asphalt. Put that on top of a rhythm section of Tino Tafarella, bass, and Ryan McDiarmid, drums, that are as swingin’ and rockin’ as rodeo bronc but as sure-footed as a prized pack mule, and you get Cow Bop.

In 2004, Cow Bop won the Route 66 Challenge, traveling the length of the storied road having departed with a mere $100 and no scheduled gigs. Their debut CD, Swingin’ Out West, released in 2004, charted in four separate genres. Since then, Route 66, Too Hick for the Room and their newest CD, Cowlifornia Swing, have delighted fans and critics around the world. The recordings feature songs and musicians from across the wide spectrum of the American musical palette.

Along with numerous appearances at esteemed nightclubs and concert venues throughout the world, Cow Bop has been featured at the Montreal & Monterey Jazz Festivals, the Sisters Folk Festival, as well as the Elko, Heber City, Monterey and Santa Clarita Cowboy Gatherings. For an extra treat, check out Bruce’s guitar work featured in Clint Eastwood’s films, including the Academy-Award winning Million Dollar Baby.