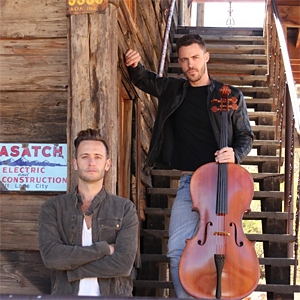 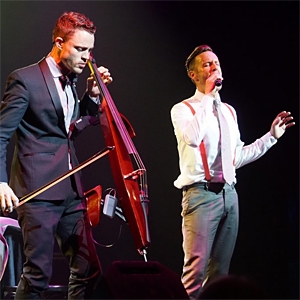 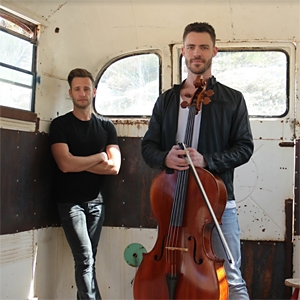 Branden & James, the Cello and Vocal duo, brings the soulful timbre of James on his cello combined with Branden’s emotional and powerful vocals, creating a sound that leaves audiences feeling moved and inspired. “…the always supportive, sometimes haunting power of the cello accompanying Branden’s voice solidifies the classical sound, adds new depth to the popular, and allows the audience to just sit back and take it in…so movingly, that you may forget to breathe!” says Paul Lisnek, Host of Broadway in Chicago Backstage.

The energy and fervor behind their music has a story to tell of their unique pairing. Branden had a successful career on stage and in recording prior to his meeting the Australian cellist, James. Some of Branden’s accolades include finishing as 2013 Finalist on America’s Got Talent, appearances at The Metropolitan Opera, Lyric Opera of Chicago and Los Angeles Opera, two world tours with the renowned Twelve Tenors and two solo releases worldwide. James brought to the mix his own share of musical accomplishments, studying as a pianist at a young age and a career in music education before discovering performance as his ultimate love. James initially came on board to music direct one of many charity concerts that Branden was performing in at the time and their connection was so immense they began to play together. Since then, they’ve been touring around the world playing their original songs and innovative, classically inspired covers.

Since then, they have been traversing the globe sharing the stage with legends such as Sarah Maclachlan, Rita Moreno, Sally Struthers, Loretta Divine, Bruce Vilanch, Constantine Maroulis and Kimberley Locke. They regularly entertain for Princess Oceana and Azamara Cruise lines with their energetic shows, “On The Corner of Symphony and Soul" and “From Bach to Beiber.” Reminiscent for some as The Piano Guys meets Josh Groban, they weave familiar melodies of pop tunes in classical style with their own unique sound. Branden says, “people tell us we’re so unique and different. I think that’s what excites us most. We’re actually doing something that hasn’t been done before.”