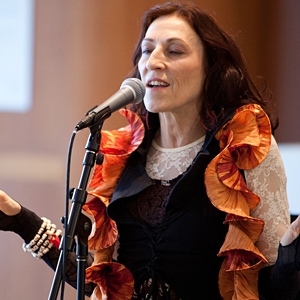 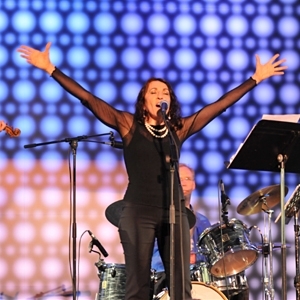 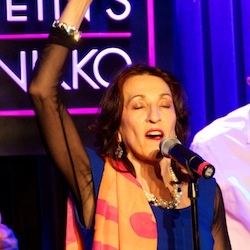 Betty Roi is an authentic Parisian chanteuse. For her, singing has been a way to both know herself and to connect with the rest of the world. It was music and dance and the dreams of performing in America that fueled her longings as a child growing up in Paris. She sang with her sister and musician friends learning a broad repertoire of French cabaret and popular songs.

When she was old enough to leave home, Betty entered a musical theater training program in Spain and performed there and in Israel. Her interest in dance took her to New York, where she studied at Alvin Ailey Dance School. When her travels brought her to San Francisco twenty-seven years ago, Betty knew she had found a new home.

She quickly became known for dramatic versions of French cabaret music. However Betty could celebrate her Parisian roots, while also embracing the musical history of her adopted home in the U.S. She studied cabaret and jazz vocals with Faith Winthrop and formed a trio called Ménage à trois. Betty performed frequently throughout the San Francisco Bay Area in venues such as the Plush Room, Herbst Theater, the Grand Café in the Hotel Monaco, the Ritz Carlton, Piaf’s, Café Claude, Bruno’s, the Alliance Française, and the National Cabaret Convention. As an actress, she played in San Francisco fringe theater during the 1980s.

Betty’s ability to celebrate tradition while making the new her own can be heard in her first CD “Enchanté,” which was released in 1999. Faith Winthrop describes her voice as “pure, playful, sensual and sincere.”

Betty continued to study jazz vocals and improvisation at the Stanford Jazz Workshop, and with the masters, Rhiannon and Laurie Antonioli over the years. At the same time, she became passionate about practicing and studying yoga and is now a well-respected yoga teacher in the San Francisco Bay Area. In 2003, she founded Yoga du Soleil Maison of Healing Arts (www.bettyroiyoga.com).