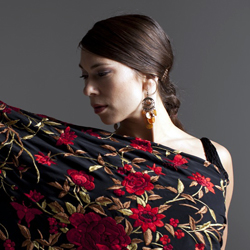 Clara Rodriguez is a Flamenco performer in the Bay area, and has dedicated more than 20 years to the study of her craft. She has since been a featured soloist in productions throughout the United States, Spain, Portugal and India.

She was drawn to the art form at an early age in her native Santa Barbara, California. Teachers in these budding years included Roberto Amaral, Linda Vega and Kathy Cota, and she was fortunate to attend workshops by visiting flamenco artists from Spain including Eva La Yerbabuena and Belen Maya. Her pursuits continued throughout high school and college in Los Angeles, where she began her career. In 2005 she had the opportunity to join Benise “Nights of Fire” in a PBS Special and 20-city US tour, and in 2011 was invited to perform in India along with the company at the Jaipur Palace. She has performed at the Greek Theater, Kodak Theater, Alex Theater, Fountain Theatre “Forever Flamenco” series and in 2007 danced in the music video for Iron and Wine “Boy with a Coin”. She performed regularly with Soniquete Flamenco, directed by guitarist Jose Tanaka, and with Roberto Amaral’s company “España Clásica”.

Clara moved to southern Spain in 2008 after several extended stays. While living in Granada she performed regularly at such venues as Tablao Albayzin, Venta el Gallo, Eshavira, and Zoraya de los Jardines alongside such noted artists as Rafalín Habichuela, Emilio Maya, Ana Calí and Juan Angel Tirado amongst others. She has studied extensively in Sevilla, Granada and Madrid with master teachers Juana Amaya, Concha Vargas, Andrés Marín, Isabel Bayón, Andres Peña, Úrsula Lopez, Alicia Márquez, Ana Calí, Patricia Guerrero and a host of others. During this time she also studied flamenco singing with the legendary Inés Bacán of Lebrija.

Returning home to California in 2010, she planted herself in the fertile flamenco scene of the Bay Area. In November of 2012 she directed “Somos Tierra: A Flamenco Landscape” produced by the Azahar Dance Foundation at the Cowell Theater. She has performed as soloist with the leading flamenco companies of the region including Yaelisa Caminos Flamencos, La Tania Baile Flamenco, and Theatre Flamenco. She keeps a busy schedule at popular local venues, and in the past year has performed and taught workshops in Los Angeles, San Jose, Fresno, Sacramento, Nevada City, and Santa Barbara. Locally she has taught workshops for DanceVersity, a youth world dance program, Zambaleta School of World Music and Dance, and CollegeTrack for Oakland high school students. She currently holds regular dance classes in Oakland.

A lifelong musician in addition to her dance career, Clara is a classically trained pianist and holds a Bachelor of Arts from UCLA in Ethnomusicology, where amongst other things she studied the North Indian classical sitar, Balinese Gamelan, and was a member of the Bulgarian women’s choir.