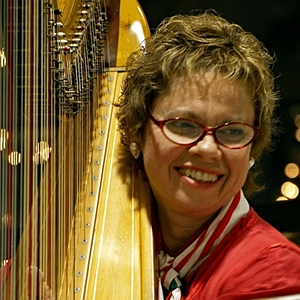 Janice Ortega, a San Franciscan, began her studies of the harp at age 10. She graduated with honors in music from California State University East Bay. Several scholarships enabled Janice to continue graduate studies at the Royal Conservatory of the Netherlands where she received the title of Artist Diploma. She received the Master of Music Degree in harp performance from Indiana University under the direction of Susann McDonald. Janice also studied with Juilliard Professor Nancy Allen at the Aspen School of Music.

Janice has performed in Europe with the Concertgebouw Orchestra in Amsterdam, Liege (Belgium)  Orkestra Philharmonique, Limburg (Holland) Symphony Orchestra, Gianville Symphony in Milan, Italy, and the Von Karajan Orchestra (Berlin). She made many European television and radio appearances as soloist and as a member of chamber music ensembles.

Janice has performed for nearly 35 years and is active as both a classical and pop musician in the Bay Area. She can be heard frequently in major hotels including the Ritz Carlton, Fairmont, Mark Hopkins, and the St. Francis. She has performed for several years as soloist and in ensemble settings with the symphony orchestras of Berkeley, Oakland, and San Jose, the Peninsula Civic Light Opera, and with the Seabourne Cruise Line and Royal Viking Cruise Lines. She is currently on the Music Faculty of California State University East Bay, Mills College and Diablo Valley College.