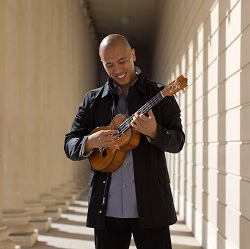 Fans have described Ben's style as a mix between diverse vocals and `ukulele virtuosity.  He plays just about every type of music out there, and he doesn't hesitate to mix in a few stories between songs.

Born and raised on the island of Kaua`i, Ben studied the piano, trumpet, and baritone before falling in love with the four-stringed `ukulele.  In 1999, he began his studies at Southern Oregon University where he would eventually graduate with an MA in Teaching, a BA in English Writing, and a minor in Human Communication.  During that time, he also recorded two independent albums with his band Melemana.

Since college, Ben has been invited to play and speak all around the world, including a 2012 World Musician selection by the American School in Japan.  He has accumulated thousands of hours of stage-time, and is continually redefining his performances to ones that both new and returning fans love.  In 2013, he made San Francisco, California his new home, but he will always remain connected to the island of Kaua`i, where his musical journey began.