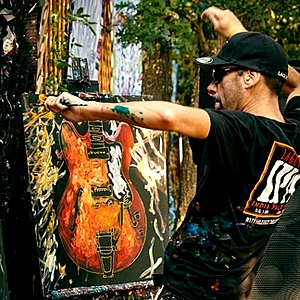 Inspired by the man who put the face on rock and roll, Stanley Mouse, and music Neal Barbosa became Livepainter. Later inspiring his mentor to paint LIVE painting on stage with his friends then onto stages in front of thousands Neal seems to channel Hendrix, Jerry Garcia, Jim Morrison and Frank Zappa with wet paint.

When painting a guitar image he often jams with the band strumming the painting with his brushes. His paintings are LIVE and you can see them take form dancing to the beat of the music. Neal is a feast for the eyes and an amazing artistic talent. He can adapt to your particular needs affair and style of music.