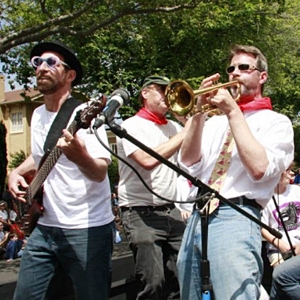 The JazKatz are a quintet rooted in a sweet Bop sound that places a unique spin on the songbooks of Miles Davis, Wayne Shorter and John Coltrane. The innovative charts of this era allow the Katz to completely recreate a song each time it is played, and so craft it to their mood or that of the audience.

The group is composed of Bill Essert (trumpet), John Kiskaddon (keyboards), Peter Fetterolf (trombone), Rex Vector (drums and vocals) and Jeremy Sherman (bass and vocals). The JazKatz are composed of players who have found balance in their lives and have carried it forward into their music.

Recently the Katz have begun performing more of their own compositions which has added a rich and unique texture to their performances. The JazKatz have a standing gig at the Park Ave. Bar and Grill on Piedmont Avenue, which fills not only the café, but the Avenue itself, with their soft, tight jazz sound. The Katz are also a regular feature of Piedmont community events such as the annual Bird House Auction, the July 4th Parade and the Harvest Festival. In an open air venue the sound of the Katz changes and fills the streets with high-octave horns and bass-driven rhythms.

Piedmont’s JazKatz not only has the disciplined mastery of instruments; the group effortlessly improvise through jazz standards and self created ballads.