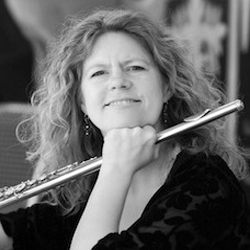 Flutist Diane Grubbe freelances in the Bay Area, performing regularly with Pocket Opera and appearing with many regional ensembles, including Symphony Silicon Valley, Festival Opera, and others. A skilled performer of contemporary music, she often appears with sfSound Group and has performed with Earplay, the Eco Ensemble, and the San Francisco Contemporary Music Players.

Since 2004, Diane has been the flautista in Quinteto Latino, the Bay Area wind quintet specializing in classical music from Latin America. In 2012 Quinteto Latino released their first CD, 100 Years of Mexican Music for Wind Quintet. Diane is a graduate of San Francisco State University and the San Francisco Conservatory of Music. Her instructors have included Paul Renzi, Lloyd Gowen and Tim Day of the San Francisco Symphony. She has performed in masterclasses with Julius Baker, Heinz Holliger, Robert Stallman and Robert Dick.

Diane often performs for weddings and events as a solo flutist or in collaboration with other Bay Area musicians.